"Bog Trotters" is a long-standing English term for Irish people,especially Irish peasants. They are shown here as near imbeciles,frolicking over the countryside.

"The Irish Ogre" about to devour the peasants is none other than Daniel O’Connell, "the Liberator". He earned that name by leading a peaceful struggle for Catholic emancipation. Why he is depicted with copious bags of rent money is unclear.

"The workingman’s burden" shows a gleeful Irish peasant carrying his Famine relief money while riding on the back of an exhausted English laborer. The cartoon could just as easily have depicted Irish peasants carrying absentee English landlords on their backs.

"The Pig and the Peer". This cartoon shows a life-size pig with an Irish accent pleading with the English Prime Minister. During the Famine thousands of Irish peasants were evicted to make way for animals that could "pay rent".

"Two Forces" shows "classical" Britain using the sword of law to protect Ireland (Hibernia) from Irish "anarchists" and their demand for land reform.

"Scientific Racism" from an American magazine, Harper’s Weekly , shows that the Irish are similar to Negroes, and should be extinct! 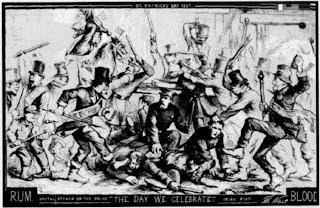 Cartoons for magazines such as Harper's Weekly featured cartoons by Thomas Nast and depicted Irish immigrants as ape-like barbarians prone to lawlessness, laziness and drunkenness. "St. Patrick's Day, 1867...Rum, Blood, The Day We Celebrate" shows a riot with policemen and ape-like Irishmen. 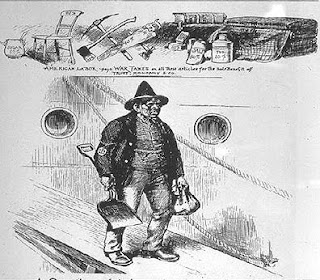 This cartoon was labeled "A Question of Labor" and was published in Harper's Weekly in 1888. 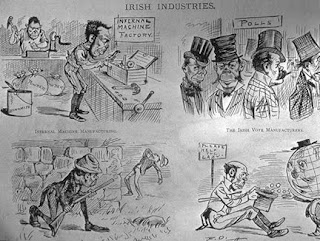 These cartoons from an 1881 issue of Puck depict common held negative views of most Irish-Americans. 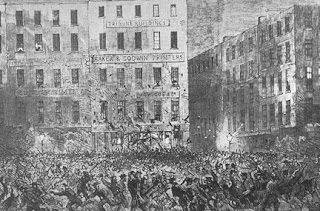 The Conscription Act of 1863 made all white men between the ages of twenty and forty-five years eligible for the draft by the Union Army. Blacks were not drafted or forced to fight and white men with money could legally hire a substitute. Lower-class whites (many of whom were Irish) resented the draft. This print shows the 1863 riot in New York City by a mob of lower-class whites (including many Irish). 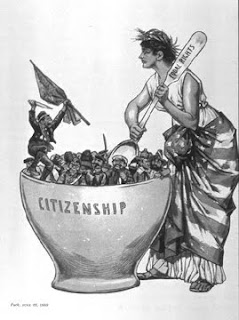 This cartoon printed in 1889, stereotypes the Irish as unmixable in America's melting pot.